Creative/Art Director, Visual/UX Designer, Sits in the Chair Where the Buck Stops 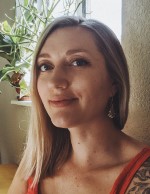 Billing Manager, Jacklyn of All Trades, Master of the Spreadsheet

Photography of Emily by deborah sherman photography; all other photos taken in-house.

How does an UCLA History major get herself into advanced design class? “I camped outside of Professor Kathleen Bick’s office for two weeks begging for an audience. I wasn’t in the design program, but I was really drawn to design and wanted to do an independent study. I persisted… she finally relented. I got an A.” Not exactly what one would call a typical start, but an example of Emily’s undeniable drive when it comes to something she’s passionate about.

Many more design classes followed, leading to employment and creative partnerships with industry professionals including Kelly Goto and Shelby Tupper. In her ten years of experience prior to opening Waxcreative Design in 1998, Emily was immersed in graphic design. From wedding invitations, medical packaging, and silkscreening to menus, corporate newsletters, and CD packaging, Emily created a wide spectrum of communication designs before ever signing on to the internet. But she wouldn’t reroute her road to business ownership for anything, stating, “Schooling only takes you so far in this industry. Experience — including both a honed ability to understand audience as well as the ability that only some accomplished designers have to see design potential in raw content — this is a major key to success.”

That, yes. But also hunger.

In the late 90s Emily heard the call of the web — or rather, her sister’s nonstop badgering for a workable and attractive website that both showcased her as an author and furthered her career goals. This was new. This was innovative. This was something that Emily couldn’t resist. It fed her creative side while stretching her technical muscles. Armed with her newly-learned HTML skills and a decade’s worth of invaluable experience, Emily set to work on what would become the first version of JuliaQuinn.com (redesigned for the fourth time mid-2014, with a major under-the-hood overhaul in 2017 —  go visit! It’s sublime.)

Other sites followed quickly. Then in early 2000 Emily partnered with web design powerhouse Goto to write a book that would prove to become a web industry standard. Web ReDesign 2.0: Workflow That Works, is the second edition that was released almost five years later, just as CSS was replacing tables. Translated into 14 languages, this book continues to be a staple in web design departments and firms across the globe and included in college-level and post-graduate curricula. It’s still in print and selling well.

Over 100 highly acclaimed sites after that first incarnation of JuliaQuinn.com, Emily’s excitement for her craft is as fresh as it was when she parked herself outside of Professor Bick’s office that fateful fall day.

And in addition to being Waxcreative’s Creative Director, Emily also served as editor-in-chief of FairyRoom, where her I’m-so-proud achievement was a literary analysis she penned on the comparative credibility of Chaucer’s Wife of Bath. Well-rounded, indeed.

back to top ↑
our work
our services
work with us